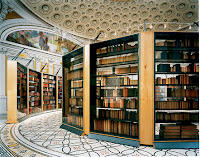 Thomas Jefferson, an avid reader and book collector, offered to sell his collection to the government to begin the process of replenishing the library. On this day (January 30th) in 1815 Jefferson sold his collection of 6,487 volumes for $23,950 to the United States Congress, which was approved by President James Madison. The Library of Congress was reborn.

I am not much of a fan of Jefferson's theology nor do I care much for his views on Jesus, but I certainly agree with him on books. I love books. Yes, I have a Nook and I use it to read ebooks, but there is nothing that can replace reading a good, old-fashioned paper and ink with pages bound book while sitting in a comfortable chair.

There can be no doubt that both men were right.
___
Further Reading: