Background Checks and the Death of Common Sense 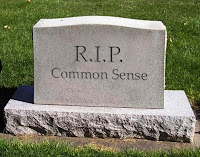 Since the tragic shooting deaths of twenty-six people, twenty of them children between the ages of five and six in Sandy Hook, CT, the issue of gun control has been brought, once again, to the forefront. While there seems to be deep division in reference to stricter gun control laws, the Senate is showing bipartisan support for expanding background checks for would-be gun owners. Two Democratic senators, Chuck Schumer (NY) and Joe Manchin III (VW), and Republicans, Tom Coburn (OK) and Mark Kirk (IL) are discussing their options on possible legislation in expanding such background checks.

Recent surveys of the American people reveal broad support for such measures. According to a recent Pew poll, 89% of those surveyed support mandatory background checks for gun buyers, while a CBS News/New York Times poll shows overwhelming support across party lines (89% Republicans, 93% Democrats).

It is important to note we're not talking about stricter gun laws, just mandatory background checks; and I find it quite astonishing that even here there are those who oppose, what seems to me, an obvious, common sensical precaution. But Wayne LaPierre, the Executive Vice-President of the National Rifle Association, opposes such mandatory checks arguing that it won't stop the criminals from getting and using guns, and that it would place an undue "burden on law-abiding citizens."

One thing is for certain-- LaPierre has resorted to two terrible arguments that both sides of the political aisle employ frequently to oppose something.

The first is that expanded and stricter background checks will not work because it won't stop all gun violence. Of course, it won't stop all gun violence. No one is naively arguing that. But such background checks can potentially stop some gun violence from taking place. It likely would not have prevented the massacre in Sandy Hook, Connecticut as Nancy Lanza, the mother of the perpetrator, legally owned the guns in her name, but that is not to say that expanding the criteria of the NICS Criminal Background Check System, requiring the states to regularly provide updates to the system, and making it illegal to sell a gun without such a check will fail to halt someone intending to "shoot up the place." The "if we can't stop all of it, let's not do anything that might stop some of it argument" is just plain silly. The same argument can be made in reference to substance abuse. Since we cannot stop everyone from abusing illegal substances, let's legalize them and not worry about it. Since it is impossible to stop everyone from speeding on the freeways which will cause accidents, let's not have a speed limit.

The deeper issue here is that our politics has become so polarized that no one trusts anyone on the other side. This means that there can be no compromise nor meeting of the minds to find, at the very least, partial solutions to problems. Both sides feel that if they give their opponents even an inch they will attempt to take a mile. There can be no compromise because there is little trust.

And when there is a dearth of such trust and political opponents treat each other more as enemies than as people with different points of view working for a common cause, one of the first things to go by the wayside is common sense.

Without common sense, human discourse is reduced to fallacious arguments meant, not to persuade, but only to keep the other side at bay.

When common sense dies, nonsense prevails.
Posted by Allan R. Bevere at 7:08 AM

I think it's absolutely clear that Wayne LaPierre lives in an alternate universe. Joe Scarborough, who is not a raving liberal, describes him as coming from the survivalist section of the NRA.

I'm hoping we can reach common sense gun laws. I'm not sure going back to the days of the Wild West is a common sense direction!

I couldn't agree more with you. You put my thoughts into words perfectly. Sad thing is so many in the church are falling into these two categories as well instead of providing an alternate view that would better represent our faith over the god of nationalism.