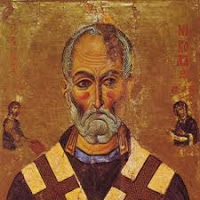 Peter Enns has written an excellent post on the real St. Nicholas. I quote selected portions:

Nicholas was a beast. Mother Teresa, Oskar Schindler, and Samuel L. Jackson all rolled into one. What an absolute crushing beast.

I like the icon–his eyes. He is looking off to the side, like he's annoyed about having to sit there for a portrait while people in need were suffering.

Can you imagine how he would react to what he has become in our contemporary society?

For "Jolly Old St. Nick" to have pulled off things like standing between a slave owner and his property, or an executioner and his victim, or go about unkidnaping a boy, he was probably a very brave man indeed with better things on his mind than making sure nice children get an X-Box or an iPad 3.

It seems to be a perpetual human temptation-- to domesticate and sentimentalize those who scandalize and convict us.

In smoothing away their hard and uncompromising edges, we make them easy to accept. We don't have to swallow hard as we read their stories wondering how their lives may call us to live. We take their larger than life reality and miniaturize it into a small but palatable fantasy that can be easily loved and embraced by all. So we take the real St. Nicholas who rescued those who would be victims of human trafficking and saved the unjustly convicted from death, and we make him into the safe and obese elf who is not to be feared by those who would do evil, but to be fed cookies in front of every household fireplace. And in so doing, we not only make him sentimentally acceptable, we also make him quite boring. I can guarantee that the real St. Nick was much more interesting to hang out with than the jolly old elf who squeezes himself down chimneys. The worst thing we can do to such beasts is make them nice. In so doing, we make them boring. Pete Enns is right-- the real St. Nick was a beast. Beastie boys are memorable.

Of course, St. Nicholas is in good company. We've had two thousand years to so domesticate Jesus, the original Beastie Boy whom St. Nicholas followed, whose faith in Jesus led him to rescue victims from slavery and give sacrificially in times of great need. It's Nicholas' unwavering commitment to his Lord Jesus that led him to stand between the executioner and the condemned.

But the temptation is to treat Jesus like St. Nicholas and make him safe, to make him the teacher of a shallow and sentimental love that feels all warm and fuzzy, but would never send anyone to a cross. If St. Nicholas has been domesticated into the jolly old elf, we have tamed Jesus at this time of the year into the baby that is gentle, meek, and mild. In making Jesus nice, we have made him boring.

Many interpret the celebration of Christmas as nothing more than a season for emphasizing and celebrating abstract concepts like joy and love. In fact, a recent survey revealed that the majority of Americans (62%) believe that the significance of Christmas centers on things (e.g. family, giving) other than the birth of Jesus. But if we are to take the birth narratives of Matthew and Luke seriously, we must know that they will not allow us to get away with the safe domestication of the birth of Jesus and the sentimentalization of his coming. The joy and love of Christmas only find their legitimate expression in this Jesus, the one who is much more than just another great teacher or sage. Indeed, it is Jesus who gives concrete expression to our joy and our giving and our expressions of love.

Karl Barth states it well: "God is not an abstract category by which even the Christian understanding of the word can be measured, but he who is called God is the one God, the single God, the sole God." And that one and single and sole God has come to us in the one and single and sole Jesus Christ. He has no rivals and no competitors for his lordship, except for those we allow him to have in our lives. Lordship is an all or nothing kind of proposition. God did not come to this world in Jesus Christ to be one lord among many or to be one recipe among others for how to achieve eternity. If that were the case, then the Gospel writers wasted their time in telling the story. But John in his Gospel wastes no time in encapsulating for us the meaning of this time of the year:


And the Word became flesh and lived among us, and we have seen his glory, the glory as of a father’s only son, full of grace and truth. No one has ever seen God. It is God the only Son, who is close to the Father’s heart, who has made him known (John 1:14, 18).

As Barth would say, this is "the mystery and the miracle" of Christmas. When we say that Jesus is the reason for the season, that should not be a reminder to us as much as a condemnation on how our celebration of Christmas falls far short of the coming of the real Jesus who preached good news to the poor, who proclaimed freedom to the prisoners, and opened the eyes of the blind, and who proclaimed the year of the Lord's favor, which was nothing less than the reversal of fortunes that begins to make all things right.
It was that Jesus who got strung up on a cross. One does not get crucified by running around telling people, "Hey, folks, I got a profound idea. Let's just love each other."
If your Jesus is just nice... you are following the wrong Jesus.
Posted by Allan R. Bevere at 7:00 AM

I take the position that revering--even acknowledging 'saints'--is unneeded in the least.