Crime Rate in the U.S. the Lowest in Decades 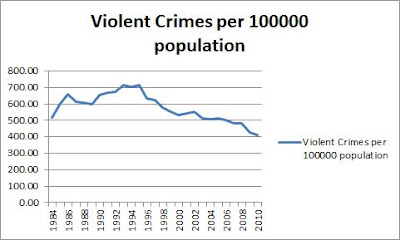 I post portions of this article, not as an argument against stricter gun laws. I believe we should have stricter laws and that it is possible to increase such restrictions while still allowing hunters to hunt. And I do believe better and more intentional laws will indeed have an effect, though it will not cure the problem (that issue sits much deeper in the human psyche). And even though deaths from school shootings are down overall since 1993, that is not, in my view, a serious argument against better gun legislation and stricter rules for background checks. I post this not to affirm that "guns don't kill people, people kill people" (I hate bumper sticker philosophy), but because it is another example as to how often perception and reality are two different things.
___
By Daniel B. Wood, The Christian Science Monitor,
January 9, 2012

The last time the crime rate for serious crime – murder, rape, robbery, assault – fell to these levels, gasoline cost 29 cents a gallon and the average income for a working American was $5,807.

The declines are not just a blip, say criminologists. Rather, they are the result of a host of changes that have fundamentally reversed the high-crime trends of the 1980s. And these changes have taken hold to such a degree that the drop in crime continued despite the recent recession.

Because the pattern "transcends cities and US regions, we can safely say crime is down," says James Alan Fox, a criminologist at Northeastern University in Boston. "We are indeed a safer nation than 20 years ago."

The data [however] point[s] to a persistent perception gap among Americans. Despite strong evidence of crime dropping over recent decades, the public sees the reverse. "Recent Gallup polls have found that citizens overwhelmingly feel crime is going up even though it is not," says Professor Fox. "This is because of the growth of crime shows and the way that TV spotlights the emotional. One case of a random, horrific shooting shown repeatedly on TV has more visceral effect than all the statistics printed in a newspaper."
___
You can read the entire article, "US crime rate at lowest point in decades. Why America is safer now," here.

Also, you might want to read, "Study: School shooting deaths down from the past."
Posted by Allan R. Bevere at 7:00 AM