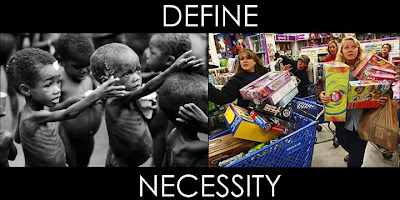 In two days the infamous Black Friday begins, though actually it is now starting on Thursday. Every year we wring our hands over the greed that is so obvious as the Christmas shopping season gets underway, while at the same time hoping to purchase that much desired gift at a great price. In some places people started lining up a week ago in front of stores in order to get a choice spot in line hoping to secure their holy grail. As we prepare for the siege I offer some thoughts:

First, I do not shop on Black Friday. Indeed, unless I have no choice, I stay at home that day. The biggest reason for me is that I simply do not like the crowds and the all-out pandemonium. Over a decade ago, I participated in one Black Friday and witnessed people at their worst, and after an hour or so, I certainly was not at my best. I did not like the experience or the feeling one bit. That was the first and last time I ventured out of my house the day after Thanksgiving.

Second, as I get older I have come to value things in my life other than saving a couple of bucks. The day after Thanksgiving has become an extension of Thanksgiving, a time for family and friends. I also try to carve out some time that day to do something I love-- reading a book. I value the thoughts of a good author more than saving $100.00 on some techno-gadget which will be outdated by next year's Black Friday. Spending a little time on Friday watching a movie with my wife is more significant than possibly though-not-likely saving several hundred bucks on the flat screen TV on which to watch the movie. As I get older, time is becoming much more precious than money.

Third, I no longer complain about Black Friday as I have in recent years because I have come to see it simply as an extension of a holiday shopping season that is out of control. In a culture where everything, including blood, is a commodity why would the phenomenon known as Black Friday be a surprise? What's the difference if we spend $3000 on Christmas gifts the day after Thanksgiving or the next day after Thanksgiving? Those who stay home on Black Friday in self-righteous indignation, but then go out during the season to spend just as much, if not more than this year's November 23rd stampeders are no different in kind.

Moreover, it should be no surprise that Thanksgiving Day itself is now being trampled upon since that day really has nothing significant to offer retailers. We have seen the slow eclipse of Thanksgiving Day for years with Christmas decorations on houses and in the stores by the beginning of November. Starting the Christmas retail rush on Turkey Day was simply inevitable. If people will come out on Thursday, then why not use a 4000 calorie Thanksgiving dinner as the way to fuel up for the midnight pushing and shoving match?

Fourth, Black Friday reveals a deeper problem in American culture. There is nothing wrong with giving gifts. I give gifts myself. But there is something wrong when Christmas moves from the season of giving gifts to show love and appreciation to the greedfest that Christmas has become. As Mike Slaughter has so helpfully reminded us in his wonderful little book, Christmas is not our birthday, nor is it the birthday of any of our friends and family. Our entire ethos of gift giving, which includes Black Friday, too often fails to reflect the self-giving of God in Jesus Christ, which is the whole reason for the celebration of Christmas in the first place. Over the years my wife and I have seldom bought gifts for each other, and when we have the gifts have been something that clearly fell into the need category. The best gifts I have ever had are the one's given to mission organizations in my name. What would happen if Christians made the commitment each and every Christmas season to give 20% of what they spend on Christmas gifts to missions? Some have gone even further and suggested that perhaps we should give one dollar to missions for every dollar we spend on gifts. If Christians adopted such a practice on a yearly basis, the yuletide season would certainly be moving in the right direction toward a truly incarnational Christmas.

Fifth, and related to my fourth point, we need to stop blaming the retailers for the fiasco that is about to happen. If Black Friday was not such a huge success, retailers would not be marketing it. If opening the doors on Thanksgiving were not a money-maker, no store would even consider it. It's we the shoppers who have made such things possible. We blame the retailers because we know we have the inability to be responsible and just stay home, so if they would only stay closed we would not have to exercise the discipline necessary to just say no to ourselves. Someone else must be to blame for our bad behavior.

Sixth, and finally, Black Friday and the entire Christmas shopping season is one more instance that reminds us of the deep problem in American culture in which we are unable to separate our wants from our needs. The reason for such inability results from the loss of life centered on the divine. When that center is lost we rush to meet our needs with every imaginable want, and we seek to make others happy by giving them what they want. Mike Slaughter writes,


The ideal, magical Christmas experience is unattainable. We stress ourselves out and even go into debt to create that warm and fuzzy feeling both for our families and ourselves. But that feeling doesn't last. The real meaning of Christmas gets lost in the chaotic clutter of shopping, spending, escalating debt, making exhausting preparations, and building stacks of gifts that most of us don't need or will not ever use. I still find shirts in my closet that I have never worn, given to me who knows how many Christmases ago. In the chaos of the holiday season, we miss the true gift of Immanuel, God with us (Christmas Is Not Your Birthday, Kindle Edition).

I just returned from a mission trip to Cuba. Every time I go there I take extra money in order to give it to some needed mission. The Methodist pastor in the town where I stayed was able to start a weekly lunch a few months ago that feeds fifty to sixty poor children every Sunday after church. He was able to start such a ministry because last February another American friend of his gave him $500.00 to get the mission going. As of the end of this month, the last of that money was going to be spent. (In Cuba, $500.00 goes a long way toward buying rice and beans and bread.) In that moment, I knew what God was telling me to do with that additional money I had brought. I gave the pastor my $200.00 extra dollars to continue feeding the children in that town. As I was leaving, some church folk were returning from the market with food for that Sunday's lunch.

I now have two hundred dollars less to spend on my family this year for Christmas, but they not only understand-- they approve. They know that Christmas is not their birthday. This is something all of us need to remember this Christmas season when God's self-emptying and self-giving in Jesus Christ are celebrated by pushing and shoving and purchasing stuff that will be returned the day after Christmas.

Excellent post--Thank you. I will be sharing it with others.

Have a blessed Thanksgiving!

"Black Friday and the entire Christmas shopping season is one more instance that reminds us of the deep problem in American culture in which we are unable to separate our wants from our needs. The reason for such inability results from the loss of life centered on the divine. "

Really? Really? Are you really saying that if each one of us would just center our lives on the divine then we would be able to separate our needs from our wants?

Are there possibly any ways to separate our needs from our wants without having to center our lives on the divine?

I allow for anonymous comments as long as they are not critical in nature. Neither do I respond to them. If you want to have a dialogue over your important questions then you need to come out of the shadows and identify yourself.