Grace of the Amazing Variety 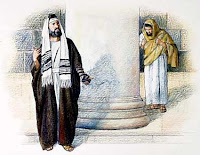 It is quite convenient that the Pharisee is standing near one whose life is so much different from his own. He now has a comparison to hold up before the heavenly throne. Unlike the Pharisee, the tax collector is a scoundrel. He is a thief and a cheat. No one wants this guy for a next door neighbor. If he lived next door to you, when you went on vacation you would have to find someone to keep an eye on your house, and an eye on him. And so, when the Pharisee states that he is not like the tax collector, he speaks the truth.

And the tax collector knows he is a wretch. Jesus states that when he prays, he does not even look to heaven. How can he? He has nothing to commend himself before God. All he can do is speak the truth before the Almighty... and the truth can only come in the form of confession-- "God be merciful to me, a sinner."

Confession is not a game of comparisons with those around us. If we've ever uttered the words or even thought such words, "God, I realize I'm not perfect, but at least I'm not like so-and-so," we've completely missed the point of confession. My life is not a character contest with those around me. The question is not how my life compares with any of my contemporaries, but how my life compares to the character of Jesus Christ and the holiness of God. No wonder confession is a daily necessity!

Both the Pharisee and the tax collector have spoken the truth about themselves, but only the tax collector knows the truth about himself. He is a sinner in need of God's amazing grace. The Pharisee probably does not deny that he is in need of God's grace, but perhaps he believes his own righteousness in which he trusts, means he is not in need of the amazing variety. Perhaps a little mixture of self-righteousness combined with some ordinary grace when he falls a little short will be enough in the eyes of God.

It becomes easy for the Pharisee to fall into such a self-righteous trap when comparing himself to others. Those who believe they are ordinary sinners are able to comfort themselves when drawing comparisons with the sinners of the extraordinary variety. We know we are sinners, but at least we are not sinners with a capital "S." How different things would look if we chose instead to compare ourselves to the character of Jesus Christ.

Such a comparison would leave no doubt that all of us-- Pharisees, tax collectors, saints and sinners-- are all in need of the kind of grace that can best be described as amazing.

God, please be merciful to all of us sinners.
Posted by Allan R. Bevere at 7:00 AM