Will the Real Martin Luther Please Stand Up? 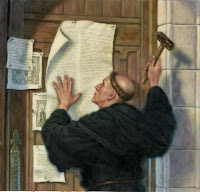 From Religion News Service:
___
Guest commentary by David Steinmetz, the Kearns Distinguished Professor Emeritus of the History of Christianity at the Divinity School of Duke University in Durham, NC.

DURHAM, N.C. (RNS) Protestants have traditionally celebrated Oct. 31 as the anniversary of the start of the Protestant Reformation, a movement that divided Western Christendom and gave birth to such diverse religious groups as Lutherans, Presbyterians, Anglicans, and Mennonites.

On Oct. 31, 1517, an Augustinian friar named Martin Luther nailed 95 theses for debate on the door of the Castle Church in Wittenberg, Germany, and so sparked a religious reform even he could not control.

But Luther's public life actually began five years earlier, 500 years ago this week, on Oct. 19, 1512, when he finished his formal theological education and was installed as a professor of Bible at a relatively new and still unprestigious Catholic university in Saxony.

No one, least of all his patrons, expected this soft-spoken young man with a tenor voice and a bubbling sense of humor to turn into a religious bomb thrower, whose theological convictions would alter the religious and political structures of Europe for five centuries. Indeed, no one could have been more astonished by this unexpected development than Luther himself.
___
The entire commentary can be read here.
Posted by Allan R. Bevere at 9:12 AM