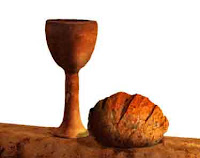 In our Wednesday Bible study this week we were discussing Mark's account of Jesus' last supper. It's quite amazing to me that the early church took this Passover celebration and turned it into a weekly remembrance of Jesus' death and resurrection. It's astounding that the meal was so transformed by the church, which leads to me conclude that the Lord's Supper was indeed simply the first disciples' obedience to Jesus command to "do this in remembrance of me."
___
Speaking of the Lord's Supper, until the sixteenth century Holy Communion was a weekly celebration for all Christians. Then some of us Protestants decided it was not necessary to do all the time. Indeed, if Holy Communion was celebrated too often it would lose its meaning-- which was the justification for monthly Communion I heard when I was growing up. Well, the last five hundred years of church history have demonstrated that those congregations that observe the Lord's Supper the least appreciate it the least. If we apply the "too much less meaning" argument to all of worship, then we should not have weekly sermons. After all, if the Word is preached too often it will lose its meaning. Indeed, instead of meeting once a week to worship at all, let's meet just once a month. If the "too much less meaning" argument is right then once a month gatherings for worship will make worship more meaningful.

As John Wesley said in his sermon, "The Duty of Constant Communion:"


A third objection against constant communion is, that it abates our reverence for the sacrament. Suppose it did? What then? Will you thence conclude that you are not to receive it constantly? This does not follow. God commands you, "Do this." You may do it now, but will not, and, to excuse yourself say, "If I do it so often, it will abate the reverence with which I do it now." Suppose it did; has God ever told you, that when the obeying his command abates your reverence to it, then you may disobey it? If he has, you are guiltless; if not, what you say is just nothing to the purpose.

I commend Father John's entire sermon for reading in its entirety.

___
This week the Billy Graham Evangelistic Association, in what was surely a political move, removed the Mormons from their list of cults. Let me say first, that I do not like the popular use of the term "cult." I wish we would just drop it from our vocabulary. It is not helpful. Second, the issue of whether or not the core beliefs of Mormonism are within the doctrinal boundaries of historic Christianity is a theological issue not a political one for the purpose of swaying elections. Since Mormons are not trinitarians it is quite difficult to label them as Christians, but that should not be a reason to vote for or against Mitt Romney in the presidential election.

Calling any religious group a cult is truly a barrier to constructive dialogue between religious groups. I am unashamedly a believer in the decisive character of the person and work of Jesus Christ, and that he is uniquely the way to salvation, which is the message of the New Testament. But I also firmly believe in robust dialogue and mutual respect between people of all faiths. We can maintain our disagreements but we still need to work together for the common good.

So I have no objection that the Billy Graham Evangelistic Association removed the Mormons from their list of cults. I wish they would drop their cult list altogether. But what bothers me is the political motivation for the action this week.

Henry Neufeld, who has written an excellent post on this notes that such political motivations are


...dangerous in at least two ways. First, if it was important to note those differences in a document on cults before, what changed? Politics. The desire to elect a particular candidate has changed the way Christian beliefs are proclaimed. The gospel has been subjected to a political agenda. Second, it implies that even if Mitt Romney agrees with a Christian voter on most issues, he really needs to be labeled a Christian before we can vote for him.

I should no longer be astounded, but I still am on how often Christians, on both sides of the political aisle, will compromise the religious claims they supposedly hold so dear, in order to advance their candidates and their political party to power. As I have noted elsewhere, when Christians try to play the role of prophet and advisor in the king's court, all too often they end up looking like the court jester who is at the king's beck and call.
___
So we now have fewer Protestants in America, but are they better Protestants? I don't know about that, but I firmly believe that the biggest threat to Christianity in the West is not atheism, but the apathy of more than a few who say they are Christians. The consumer model of Christianity in America has not led to more faithful disciples in the church, but to more self-interested consumers of therapeutic religion. To quote Forrest Gump, "That's all I have to say about that."
___
The (Good and) Silly Season in Politics:

This week's installment of the silly season in politics is a good one. Every four years both candidates for president attend the Al Smith Memorial Dinner and roast each other and poke fun at themselves. Below I have posted two YouTube videos of Governor Romney's and President Obama's speeches in order of delivery. I personally thought both men were extremely funny.

Such events are good and important and should remind us not to take our politics too seriously. It's too bad we don't have more of these kinds of events.

"A committee is a thing which takes a week to do what one good man can do in an hour."--Elbert Hubbard

"Hey, you're going to be taken home by the Marines today."--Gunnery Sgt. Wilbur Anderson, at a children's triathlon as a group of Marines carried a little boy with a broken prosthetic leg across the finish line.

"Get your facts first, then you can distort them as you please."--Mark Twain

"If the population of China walked past you in single file, the line would never end because of the rate of reproduction."--Totally Useless Trivia