Do We Need More Religion in Politics? Do We Also Need a Different Understanding of Politics in Christianity? 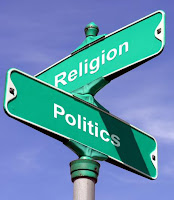 Timothy Dalrymple has written a thoughtful post entitled, "Why We Need More Religion in Politics, Not Less." I am not in agreement with him on everything he says, but I also find certain points of his argument to be spot on. In particular, he is right to suggest that the progressive religious left has hijacked God for political purposes as much as the religious right. But the focus of my interest is on what he writes near the end of his post:

There is much in this paragraph that strikes a chord with me. Too many Christians on the political left and right have become knee jerk partisans. The biggest casualty of such partisanship is that Christians on both sides often seem more interested in power than in truth. Anyone who reads this blog knows that I continue to hammer that point on a regular basis (and I refuse to stop doing so). What we lose in that is as Timothy notes, "more thoughtful ways of bringing the fullness of who we are, religious vision included, into the political arena."


Instead of American and Western Christians anchoring their hope in the political process, instead of waging war in the public forum for platform issues, and instead of the ups and downs of hope and despair that arise in the election process, I contend the Politics of Jesus is the Church and, in particular, your local church.
.
Jesus'politics is a body of people living an alternative life. Jesus' politics is kingdom living in the here and now. Jesus' politics are not concerned with power, but the revolutionary power of love and service and justice and peace and wisdom. Jesus' politics is nothing short of the power of kingdom holiness.
In the Politics of Jesus, we find an imagination fired by parabolic visions of a different order. We find an eschatology anchored in the act of God through his people. We find a power that emerges from the Holy Spirit. We find a community with a mission to serve its community instead of being served by that community.
Instead of exploitation, we find extension. Instead of violence, we find peace. Instead of acquisition, we find giving (Quoted in my book, The Politics of Witness, p. ).

Such politics of witness, as I refer to it, is not a complete rejection of the nation state and the possibility that it may and must seek the common good; but it a highly qualified possibility. The Bible certainly indicates that God expects the nations to act justly and that he will hold them accountable for doing so (cf. Isaiah 10:1-19). The politics of witness does not preclude the church working with the nation on matters that benefit the common good, but that is not the primary political task of the church. Its principal political charge is to show the nations in its mission what God expects of them. When the politics of the church is first and foremost viewed as forging alliances with the state and playing power politics in the halls of government, the message of the gospel and the mission of the church are undermined. Indeed, when such alliances are forged and power games are played by Christians who have come to believe that the political action is in Washington D.C., America becomes the church for such Christians on the religious right and the religious left. The one, true ecclesia is no longer viewed as its own politic. When that happens it becomes irrelevant.

So it may indeed be the case that we need better religion in nation state politics, but I seriously doubt that will happen until Christians come to understand politics differently. Without that different understanding, the temptation of Christians on the political right and the left will be to "hijack God" in service to the Republican and Democratic Parties undermining the church's kingdom witness.

And that will continue to be a problem without a solution.
Posted by Allan R. Bevere at 2:00 PM