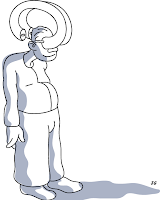 Confirmation bias is a member of the family of cognitive biases that inhabit our brains. Cognitive biases are instances of evolved mental behavior. They resemble mental shortcuts that have evolved in our brains over time. Our collective confirmation biases impact how we think and how we process information. They impact how we make decisions. Sometimes they can lead us astray.

Confirmation bias creates in people a tendency to favor information that confirms their beliefs or hypotheses. It causes us to selectively seek out and interpret information that supports our own conclusions and beliefs.

In other words, if you are a Republican, you will inherently gravitate to candidates, literature and programming that support your position. Democrats do the same thing. Of concern to me lately, though, is that the bias in our news media seems to be exploiting our confirmation biases. This, in turn, contributes to the polarization of American politics.

Few would argue that liberals and conservatives have become significantly polarized over the past 15 years or so. Many Republicans I know don't just dislike Barack Obama, or disagree with his politics; they hate him. Democrats I know don't carry the same level of disdain for Mitt Romney – yet. But if he wins the election, watch out. Many Democrats will be spitting the same venom at Romney that the Republicans spit at Obama. Trust me, MSNBC will make it happen for them.

In my view, our news media and television in particular have learned to make money by preying on our confirmation biases. Hardcore Republicans watch Fox News. Hardcore Democrats watch MSNBC. Driven by confirmation biases, viewers lock into the news programming that most reflects their own conclusions and judgments. Conservatives may view Fox as their only alternative to the otherwise biased liberal media, but nonetheless, they are still watching Fox. Many I know watch it all the time.

The networks seem to have decided that if our confirmation biases attract us to news that supports our beliefs, they might as well give it to us. If our perspective is supported all the time, we will stay tuned. All they need to do is pick a side and stick with the story. That equates to loyal viewers, which increases advertising revenue for the network. It also may equate to lousy, borderline anti-social "news" broadcasts. But given the financial realities of the world in which we live, it should come as no surprise that this is occurring.

Just look at the landscape. We have no newspaper of record. The New York Times is liberal; the Wall Street Journal conservative. There are no Walter Cronkites. Instead, we have Bill O'Reilly and Rachel Maddow.

All of the above, at least to a degree, are exploiting our confirmation biases to gain readers or ratings.

When it comes to politics, things get even worse, because the confirmation bias is stronger for emotionally charged issues and entrenched beliefs. If the news on our network of choice relates to politics, we are even more likely to be victimized by our confirmation biases. We will have a strong tendency to accept as accurate and correct the information presented in support of our conclusions.

None of us, of course, is immune from confirmation bias. We all have it. The best we can do is be aware of it and try to combat it. We need to demand more from our news sources. We need to actively seek out information that supports views different than our own, and seriously consider it. We need to change the channel more often.
___
You can read the entire article, "As media preys on confirmation bias, we become polarized," here.
Posted by Allan R. Bevere at 6:00 AM