All Political Regimes Are Utopian 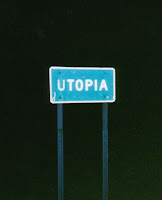 I've had very little time to blog so far this week, but here is a wonderful post by Peter Enns (I quote only portions) that all Christians need to heed in this elections season.
___
All political regimes are utopian. Communist, socialist, fascist, monarchic, and democratic. All of them. They all make promises to be the ones who will deliver the goods. They all promise that, without them, you are lost. They all claim to have “arrived,” to represent the culmination of the human drama, to be the true light, a city on a hill, that which brings you and all humanity true peace and security.

That is what "eschatology" means. It doesn’t mean “end of the world” in some video game apocalyptic scenario.

Eschatology means: "We have brought you to where things are as they should be. You are at the place where you can now–finally–have reason to hope. Trust in us. Fear not." Eschatology means the pinacle of true humanity, where wrongs are righted, all is at peace, and the human drama comes to its fullest expression.

They all say that.

When we fear, or rage, or are depressed about politics, it means we have invested something of our deep selves into an “eschatology”–into a promise that all will be well, provided you come with us.

...Christians should not adopt the rival eschatology that this or any political system or politician is of such fundamental importance that the thought of an election turning sour or the wrong laws being passed mean that all hope is lost.

This is what the first Christians were taught about the Roman Empire, which promised its citizens peace, grace, justice, protection from enemies–all of which was called "salvation" (that's the word that was used at the time). The Gospel offered an "alternate eschatology," where the goods were delivered, not though the power of the state but through suffering and enthronement of King Jesus.
___
You can read Pete's entire post,"Dear Christian: If the Thought of Either Romney or Obama Getting Elected Makes You Fearful, Angry, or Depressed, You Have What we Call a Theological Problem," here.
Posted by Allan R. Bevere at 12:48 PM