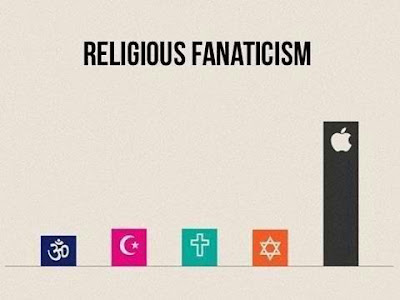 Apple released its new iPhone 5 yesterday. I proudly tell folks that I am not a member of the Apple Cult. I have an Android phone, I do not have an Apple computer and do not feel deprived. There is no doubt, however, that Apple continues to produce excellent products, but for the life of me I cannot figure out why anyone would wait in line for hours to get the latest version of a smart phone. What does it say about a society when people will wait for hours because they can't wait to have the latest technological gadget? I will never forget the time about four years ago when having a conversation with a young man in his twenties, he said to me in all seriousness that his generation was not materialistic like his parents' generation. It was the last thing he said to me before leaving for the Apple store to get in line to wait overnight for the latest version of the phone at the time. It was going to cost him a couple of hundred dollars to break his contract in order to get the phone early. The irony of and disparity between his words and actions were lost on him.
___
Speaking of words and actions, I had the great honor and privilege of giving a presentation to our Conference Board of Ordained Ministry on the character of a Methodist pastor by reflecting on the vows of ordination. We live in a society where words are too often separated from deeds. We say that talk is cheap and that actions speak louder than words, and there is truth in those expressions. But in the Bible speech is action. In Genesis, God creates by the spoken word-- "And God said..." In the Gospels Jesus brings new life by decree, "Lazarus, come forth!" The vows we make in marriage, baptism, ordination, are speech acts. Such speech acts deserve careful reflection and consideration. Such vows assert who we are and what we desire to become. Our words, our promises matter.

___
My friend, Ted Gossard, did an extended review (in five parts) of my book, The Politics of Witness. I appreciate his work on it. Ted is a thoughtful blogger who posts virtually everyday. Reading his blog is worth your time.
___
Today is the first day of autumn. Summer is my favorite season of the year. I love the warmth and the growth and the fresh vegetables out of the garden and fishing at the crack of dawn on a lake. I feel a certain sadness every year with the passing of summer, but I also very much like autumn. The leaves on the trees turning red and gold before they fall to earth reminds me that even in death there is a glory to be revealed, like the sadness of the passing of summer but anticipation that there is more to come. I do not like to see the summer end, but I welcome the brisk, clean air of autumn.
___
In moving into a new neighborhood, I am not sure what would be more frightening: encountering the Orkin Insect or the Vonage Bundle People, cute puppy notwithstanding. 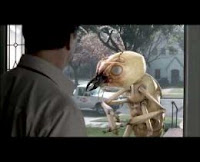 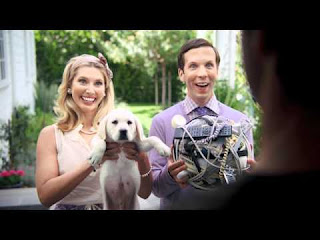 ﻿
___
It seems to me that one of greatest problems with the church in the West has been its self-distraction away from its mission of making disciples of Jesus Christ. We seem to be very busy with almost everything, but the task Jesus himself set before us. One of the jobs of pastoral and lay leadership is to constantly remind the church of its singular and central mission. There are times when folks in the church come up with some great ideas that will certainly help people, but do not contribute toward the mission. Everything we do must contribute toward that mission. It is the task of the leadership to keep a church's focus on that mission.
___
This week a jury awarded a man 7.2 million dollars for contracting a lung disease from breathing in fumes from microwave popcorn. The guy ate two bags of popcorn a day for years breathing in the chemical diacetyl, which is used in the buttering flavor inside the bag. I have no idea whether diacetyl can cause such damage, though the jury in the case obviously did. What I do know is that nothing can beat popcorn popped the way my grandfather did it-- in a big pan with a lid on the stove and pouring on real butter. We have been so busy over the years avoiding fat in our diets that we have substituted strange chemicals whose effects will only be known over time. Not only that, we have substituted flavor in favor of convenience.
___
I found this article written by Alister McGrath a couple of years ago entitled, "Augustine's Origin of the Species: How the Great Theologian Might Weigh in on the Darwin Debate." McGrath writes,


Augustine does not limit God's creative action to the primordial act of origination. God is, he insists, still working within the world, directing its continuing development and unfolding its potential. There are two "moments" in the Creation: a primary act of origination, and a continuing process of providential guidance. Creation is thus not a completed past event. God is working even now, in the present, Augustine writes, sustaining and directing the unfolding of the "generations that he laid up in creation when it was first established."

This twofold focus on the Creation allows us to read Genesis in a way that affirms that God created everything from nothing, in an instant. However, it also helps us affirm that the universe has been created with a capacity to develop, under God's sovereign guidance. Thus, the primordial state of creation does not correspond to what we presently observe. For Augustine, God created a universe that was deliberately designed to develop and evolve. The blueprint for that evolution is not arbitrary, but is programmed into the very fabric of creation. God's providence superintends the continuing unfolding of the created order.

Yes, indeed. How much the Bishop of Hippo allowed for the universe and the world to develop in true freedom, though still in keeping with divine providence is an important question. Nevertheless, Augustine was spot on in reference to the ongoing development of creation, and long before Charles Darwin was even born.

The entire article is worth a read.
___
Silly Season in Politics: 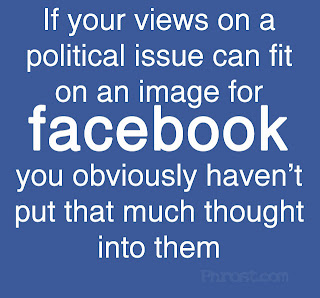 "It is amazing how quickly the kids learn to drive a car, yet are unable to understand the lawnmower, snowblower or vacuum cleaner."--Ben Borger

"A true friend is someone you can disagree with and still remain friends. For if not, they weren't true friends in the first place."--Sandy Ratliff

"Great occasions do not make heroes or cowards; they simply unveil them to the eyes of men."--B.F. Westcott

"A race is not well-run unless you've crossed the finish line knowing that you couldn't have kept going for one more step. If you could have, then you didn't give it everything you had."--Jackie Dugall

"You may have a fresh start any moment you choose, for this thing we call 'failure' is not the falling down, but the staying down."--Mary Pickford

Oak trees do not produce acorns until they are at least fifty years old.