How Social Media Has Ruined My Appreciation for Satire 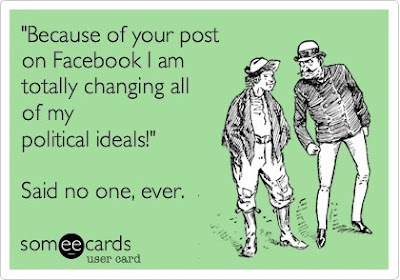 Definition of Satire: 1. the use of irony, sarcasm, ridicule, or the like, in exposing, denouncing, or deriding vice, folly, etc. 2. a literary composition, in verse or prose, in which human folly and vice are held up to scorn, derision, or ridicule.
___
For many years I have had a great appreciation for satire. Whether it's Erasmus' The Praise of Folly or Mark Twain's Huckleberry Finn, satire has been a powerful way of holding up the vices and hypocrisy displayed in societies and in particular groups of like-minded people. While nuance is important in serious critique, nuance can also blunt the force of serious moral judgment. We can spend so much time qualifying a position that we forget that ethical and political and religious views reveal core values and priorities. Satire, on the other hand, shines a bright light on those values and priorities and raises important questions in a way that cannot be avoided. Does one's position on economics truly show disregard for the poor? Does one's perspective on human sexuality in reality promote immorality? Satire puts such questions front and center.
.
And satire has been the medium by which such questions must be faced resulting in serious discussion and dialogue. Once the over-the-top portrayal has been put forth, the work of vigorous discussion and debate can begin. Satire is not meant to describe with accuracy the values and priorities of others; it is meant force the discussion of people's values and priorities. Satire is not an end in and of itself; it is a means to the end of facing what individuals and groups truly believe as important. Satire should lead to the kind of nuanced discussion whereby the critics better understand their opponents, realizing that satire most often is a caricaturization of the other with grains of truth embedded.
.
But now we have entered the age of social media.
.

Facebook and other forms of social media have all but destroyed the significance of satire. Those of us on Facebook et al, particularly in this election season, witness on a daily basis satirical postings infinitum ad nauseum, lampooning Republicans for wanting to starve poor children and ridiculing Democrats who loath individual freedom in favor of government control. If such satirical portrayals led to more rigorous discussion, then such satire will have served its purpose; but that is not the case. On social media satire is often presented as the complete and total truth. Priorities and values are not just questioned; satire demonizes the other side because the other side is demonic. The satire of social media insists that the other side consists only of nefarious and selfish people who love only themselves and will do anything to anyone who gets in the way of their agenda. Satire is no longer a means to the end of serious discussion; it is the end in and of itself. And when satire is the end, substantive debate is no longer possible. In this context, the response to satire can only be more satire. Satire now stifles such meaningful discussion because the caricature now becomes the reality. The other side consists of people who really are idiotic buffoons, people with sinister agendas. Dialogue is not possible with such individuals; the only recourse is to tell the stark truth of who they are. Satire no longer probes deeper realities; it reveals the deeper realities in toto.
.
Satire as its own end not only mutes dialogue between those who disagree, it also encourages discussion only among the like-minded. Such like-minded only interaction can only be so substantive because opposing views are not allowed to question the like-minded. The all-revealing nature of satire has already demonstrated that anyone with an opposing point of view is simply to be dismissed. Once the like-minded are no longer open to critique from others, the views and priorities of the like-minded tend to become more extreme. The great irony of satire as its own end is that those who use it to demonstrate the extremism of others tend to become more extreme themselves-- extremism is the birth-child of intellectual inbreeding.
.
One wonders if Erasmus or Twain were here today if they would even employ social media in their use of satire. Not only has the satire on social media become an end in and of itself, which destroys its purpose, but most social media satire is frankly bad satire, something I doubt Erasmus or Twain would desire to embrace as their own.
.
So, all of this is to say that my love for satire has been greatly diminished on account of too many of my Facebook friends, whom I like, but who think their snarky and satirical postings reveal the complete truth of what others believe. The only way to rekindle that love again is to ignore the sophomoric use of satire on social media because surely it is not going away.
.
I think it is time, once again, to read Erasmus... perhaps some Huck Finn... and sign out of Facebook until after election day avoiding all the Bart Simpsons of bad satire.
Posted by Allan R. Bevere at 6:00 AM

Satire appears to work well on when it is a small part of discourse, nibbling around the edges of a discourse aiming at truth and straight-dealing. The objective is NOT self-congratulatory satire, but truth and understanding. Since we have flipped the ratio of satire to straight talk, neither is working well. It's like a huge shark with a mouth full of rows of razor sharp teeth, chomping away - but on nothing. We have the bite, but we miss the content.

The examples you gave of effective satire were long forms. Social media doesn't really allow that. Erasmus, Twain, and even Jonathan Swift, gave significant context within their satire, developed complex characters and ideas. That's hasn't been the case with Facebook or Twitter. We're left with individual snarky remarks that provoke retaliation.

Surely this applies to blogging, as well. The cheapness of the written word is that much greater when it is also the electronically written word. The medium certainly affects the message. What will happen to meaningful conversation in a Twitter age?

That is a really interesting topic you have brought under discussion. Social media has got the big influence on. I was glad to receive the essay from the service which is approved by many students I know. It is special-essays.com and every time I order the work there I got the coupon code. This time it is for 18% off g6oa39rW

You must be very intelligent person to understand satire. But if you do, the world of literature appears in brand new colors. I was trying to distinguish it by reading http://tapthetech.org/ articles. I was very helpful for me.