I have been reading a biography on G.K. Chesterton, Defiant Joy by Kevin Belmonte. One of the things I have learned about Chesterton is that he was a fan of Charles Dickens and wrote a book on Dickens' work which Belmonte states, "sparked a revival of interest in Dickens... that has never waned." It just goes to show what a little good publicity can do for your image. As a Dickens and a Chesterton fan myself, I appreciate the connection between the two.

___
Curiosity landed on the planet Mars this week. I am curious myself as to what the rover will discover. Whenever NASA embarks on such a project there is always a debate over whether the money spent on space mission could be better spent elsewhere. It's a fair debate to have. How we spend our money does reveal what we believe to be important. Jesus himself said so (Matthew 6:21). The problem, however, is that we tend to point this out only when we believe someone else's spending is out of whack, while failing to critically examine our own use of resources. By the way, space exploration hasn't exactly given no benefits back here on Planet Earth. Because of our trekking into the heavens we have such things as safety grooving on roads, better ways to filter contaminated water, CAT scans, MRIs, solar collectors, and airport baggage scanners (more inventions are listed here). So, is space exploration a waste of money? You tell me.
___
Mitt Romney has named his running mate-- Paul Ryan, Republican congressman from Wisconsin. What does this mean for the election? Unlike the pundits I have no idea. Most Republicans and Democrats like the pick, for different reasons, of course. Well, at least both sides agree on something. Maybe they can start agreeing on getting our fiscal house in order, rather than continuing to mortgage the future of our children and grandchildren.

No Labels, a group I support, is offering twelve proposals to make Congress work. I like their recommendations. Guess what? None of the twelve will happen because the majority of politicians in both parties nor their partisan minions will allow it.
___
We use the language of war too casually. Everything we oppose has become a war. We have a war on drugs, a war on religion, a war on Christmas, a war on poverty, a war on women, a war on children, a war on terrorism. When a word is used too casually to describe too many things, its force is diminished and it becomes functionally useless. Let's reserve the term war for what war really is-- a violent and deadly thing to be avoided if at all possible.
___
This from Jeremy Weber: "Missouri voters overwhelmingly passed a constitutional amendment this week that will permit students to refuse school assignments that violate their religious beliefs." Two things came to my mind when I read this post: First, the dog is finally off the hook, and second, Calvin's decision to be a math atheist is now a legitimate excuse. 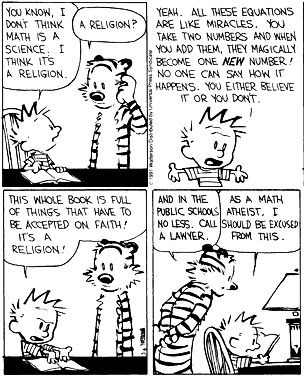 You don't realize how important the remote is for the TV until it is not working properly. We have several buttons on ours that are not functioning very well. We will be getting a new one from the cable company this next week. At least the mute button still works so I can silence all the political ads that we Ohioans now have to endure.

Quotes of the Week (Possibly, but Not Necessarily Said This Week): "The best way I feel I can thank God is to use the gift he's given me for his glory and not my own."--Caitlin Leverenz, Olympic swimmer and medal winner

"Reading gives us someplace to go when we have to stay where we are."--Mason Cooley

"Mayor Bloomberg is saying now that he has banned large sodas in New York City, his next target is going to be alcohol. Once that's out of the way he'll start his crusade against the laughter of children."--Conan O'Brien

This Week in Christian History: On August 7, 1771, Francis Asbury volunteered to go to America as a missionary answering John Wesley's call. Asbury would become the first Methodist bishop in America and is considered the father of American Methodism.
Posted by Allan R. Bevere at 10:04 AM