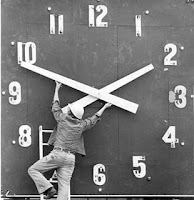 Tonight we set our clocks ahead one hour. That means a portion of the 17.6% of Americans that attend church will arrive at worship as it is about over. It would be a good idea for the ushers to place an offering plate on a table in the narthex. I'm just saying.
Speaking of Daylight Savings Time, it was Ben Franklin's idea to set the clocks ahead one hour to take advantage of more daylight during the warm summer months in the northern hemisphere. He also believed that less candles would be used if the sun set later. Some studies today suggest that DST does save a modest amount of energy. Others dispute the savings at all. All I know is that I enjoy being outside on a wonderful summer evening as long as possible.
This is really cool. A teenager has paid tribute to the Space Shuttle program by launching his own Lego version by means of a helium balloon. He filmed its flight with an attached video camera. It rose as high as 22 miles above the ground and landed in perfect condition. I really admire such "enterprising" endeavors.
This week we experienced the largest space storm in five years. I really didn't notice anything except that yesterday my GPS seemed rather confused.
The Rush Limbaugh controversy has reminded us once again of the angry, childish, and irrational nature of our discourse in American culture, whether it's about politics or religion. Of course, many partisans on both sides of the political aisle, who are more interested in their cause than they are the truth, have tried to use this against their opponents. The left, for the most part, conveniently ignores the same kind of misogynist language that has come from the likes of Bill Maher, Keith Olbermann, et al. But, not to be outdone in the political hypocrisy competition, the right has pointed this out while downplaying Limbaugh's own comments, refusing to be as outraged over their own as they are of others. So I say good for this political commentator for taking both sides to task on this issue. One of the reasons I spend time pointing out the hypocrisy of political partisans on both sides of the aisle is that it appears as if for too many of them their politics is in actuality a form of religious fundamentalism. In addition, while such hypocrisy is so blatantly obvious, many partisans appear to be oblivious to their own "glass houses." So, I will continue to post on the subject.
It's understandable that Democrats are currently experiencing glee over the current GOP presidential primary that has become a circular firing squad. But the history of presidential elections suggest that all of this will not matter much come November. While politicians refuse to move on, the American people by and large do. One subject gives way to another. The contemporary moment is what matters on election day. So, who will win the presidency come November is indeed up in the air. Will it be cake walk? Will it be close? There are too many things that can happen between now and November that make it impossible to say. In presidential elections, eight months is a political eternity.
A pastor reflects on why he blogs. I would be interested in knowing why others blog. All you bloggers out there feel free to respond in the comments.
Discipleship groups are necessary for the vitality and mission of the church. There are no exceptions.
How many sermons have you heard on greed and materialism? Some think we don't discuss these matters in the church because this is sin that hits us where we live. There may indeed be some truth to that; but I think the reason the subject is not addressed more is that Christians in the West have no idea what it means not to be greedy and materialistic. It's hard to be content when we never can get enough. Contentment eludes us. And because of this we are reduced to labeling materialists as those persons who have more than we do, while the greedy are those who make more than we do. When we are drowning in stuff it is tough to see our stuff as the result of our own obsession with stuff.
As a preacher, my task is not to make the gospel relevant. It is already relevant. My task, to quote Hauerwas and Willimon, is not to make the gospel credible to the modern world, but to make the modern world credible to the gospel.
Televangelist, Pat Robertson, has taken the position that marijuana should be legal. Life continues to be filled with surprises.
Posted by Allan R. Bevere at 2:00 PM

I wondered what Pat was smoking when I saw that headline.

Allan,
I first started a blog to meet a requirement for a technology class at Ashland. I fiddled with it off and on until I started reading John Byron's blog and talking with him about it. Now, I have tried to be a little more faithful to it. I find that I learn about what I really think as I talk/write about things. Writing the blog allows me to get words in front of me so I can think about them. Hopefully, some of it actually makes sense.