The Gospel According to Forrest Gump #3: Living Life as a Gazillionaire 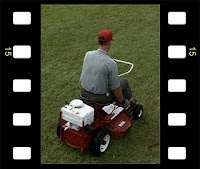 And 'cause I was a gazillionaire, and I liked doin' it so much, I cut that grass for free.

Recently a friend of mine related a story of an experience he and his son had at a major league baseball game years ago (the ballpark and the players shall remain nameless). Before the game they spotted a couple of star players down on the field close to the stands. My friend's son (probably 12 years old at the time) had brought a baseball to get autographs. Excitedly he went to the edge of the stands and asked them if each would sign his ball. As he returned to his seat he was shaking his head. When his father inquired as to what was wrong, my friend's son informed his dad that these two very wealthy and famous athletes wanted $20.00 a piece for their signatures on the baseball.''

In the movie Forrest Gump, Forrest makes a boatload of money in the shrimping business. After his mother's death he doesn't return to the business, but because of its success and Lt. Dan's smart investment in a young company, Apple Computers, Gump becomes, in his words, a gazillionaire. Back in Greenbow, Forrest gets a job mowing the grass for the local high school. Forrest reasons that being so wealthy, he doesn't need the money that he would be paid for his services, so he offers to do the job for free. He also donates a sizable portion of his wealth to his little church where he sings in the choir as well as to a local hospital for expansion, because as his momma says, "a man only needs so much money for showing off." The rest should be given to others.

Now, most of us are not now nor ever will be gazillionaires in a monetary sense, but we have things to offer simply because we can and its the right thing to do. In other words, no matter what our financial situation, all of us should live life as gazillionaires, offering our time and gifts and talents to others simply because we should. Not everything in life should be treated as a transaction-- I'll give you what you want if you give me what I want in return. It can be difficult to get out of this mentality in a culture in which everything, including blood, is a commodity. Even though we may want to do things for others "free of charge" when someone does something of the same nature for us, we feel we are obligated to her or him. How many times have we said to someone who has assisted us, "I owe you one," as if what was done for us requires a payment of some kind.

Christians should view all that they have received as blessings, not to be hoarded, but to in turn bless others. We do so not to receive something in return; we do so because we follow Jesus Christ, who offered himself for us without first requiring us to sign a contract or obtaining a handshake agreement that we would follow him in return. Paul says that while we were still sinners, Christ died for us (Romans 5:8).

To see all actions in life as transactions is to ask incessantly, "What's in it for me?" But if we are to follow the example of Jesus Christ, we should be asking instead, "What's in it for others?" Our attitude must be like Jesus who, though he was God in the flesh, did not exploit his divinity for his own ends, but gave up his privileges taking the form of a servant (my loose paraphrase of Philippians 2).

Every year at Christmas I make sure I carry plenty of $1.00 bills with me, so that every time I pass a Salvation Army bucket, I am able to put something in it. I have done this since my children were young, when we had very little money as a family. I did so as one more way to instill in them that no matter what the circumstances of life, we can always afford to be generous in some way.

The truth of the matter is that all of us are gazillionaires. We have received from God's bounty in time (24 hours in each day for all of us), talents, and gifts. The truth of the matters is most of us in the West are incredibly wealthy compared with the rest of the world. We are gazillionaires because God has given of his very self in Jesus Christ.

The blessings of life are not to be dispensed as transactions for our own personal gain, but as generous offerings to others that reflect the character of a generous God who has made all of us gazillionaires.

The Gospel According to Forrest Gump #1: Introduction

The Gospel According to Forrest Gump #2: Life Is Like a Box of Chocolates
Posted by Allan R. Bevere at 8:31 AM

Allan,
I should tart carrying dollar bills at Christmas too. I rarely carry money and then I end up dodging the red pots.

only $1 bills Allan? With all those book sales...

Sorry, the contentiousness is trying to rear its head.

Good post - generosity in spirit is so badly in need. Thank you for your generosity.

Chuck, when I get my royalty check for my book sales, that is the day I can supersize my lunch. :-)

Making the shift in thought from being somewhat modest of means in our culture to being gazillionaires in the world is hard, but most helpful. We are rich in material terms and beyond gazillionaries in spiritual terms!