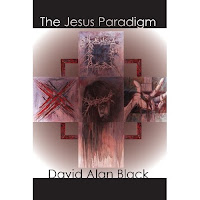 I think it's good that you have addressed questions that many Methodist readers have asked me. Perhaps we can arrange a longer exchange over the issues of baptism and ecclesiology, though that would threaten to be a very long exchange!

(Note for full disclosure: I'm the publisher of The Jesus Paradigm)

I would welcome a longer exchange, though, unlike the recent government stimulus package, it would have to be targeted. Otherwise the exchange could spiral out of control just like the federal deficit!