The Problematic Notion of Rights #3 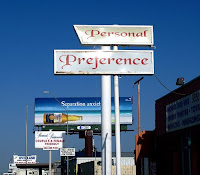 Religious Convictions as Nothing More than Personal Preference
In order to accept the modernist moral project, two distinctions must be embraced-- the universal/particular, and the objective/subjective. In both, in order to have the former, one must throw off the latter. The universal and the objective can only be had when the particulars of history (i.e. religious history), and the subjective beliefs of the religious are rejected as important for the ordering of society.
Modernism attempts to take the moral implications of religious belief, especially doctrine, out of the public realm by relegating them to the realm of the interpretive. Doctrine is interpretive, that is, it is bound to the particulars of history. A universal account of morality must be objective, therefore, particular religious affirmations must be set aside because they are subjective. Such religious beliefs may have some value, but not as they are. Since universal principles must be objective, the task of the religious historian is to peel away the layers of interpreted history to get at the so-called uninterpreted event.
For example, the claim that Jesus is the Messiah is an interpretation of who Jesus was. Why is it interpretation? Precisely because it is a particular claim rooted in a particular religious history-- the history of Israel. Only in a Jewish context can Messiah be correctly understood. If Jesus is to be embraced in some way by everyone, such particulars must be thrown off in favor of a universal understanding of Jesus, that all reasonable people can embrace. Thus, Jesus' Messiahship is no longer significant, rather the focus is on Jesus as the teacher of love. In the particulars of Jewish history, not everyone can understand Jesus as the Messiah, but universally everyone knows what love is. Thus, if Jesus is going to be meaningful in any kind of universal moral reflection, Jesus' life and ministry must be reduced to universal principles and values that everyone can understand.
Moreover, one does not read the Bible to learn about God's plan of salvation through the people of Israel and the church. Israel and church are particulars. Rather one combs through the Bible for general universal principles. So the cross is not unique in that it provides salvation for the world, rather the cross is an extreme example of sacrificial love that everyone, regardless of what she or he believes can relate to. The modernist approach to doctrine was reductionistic-- it boiled doctrine down into general universal truths that could be followed by all. These truths could be embraced without the need for conversion. These general truths that can be found in the Bible can be found equally in other holy books as well.
Such a posture effectively relegates religious convictions to the sphere of the private. Once religious convictions are made insignificant for public discourse, their moral implications are made irrelevant a well. In the many centuries after Christ, it is a long way from Paul's vision of a humanity united by the cross and resurrection of Jesus Christ and caught up into the intimacy of the trinitarian life, to Thomas Jefferson's vision of men and women united by abstract and general universal laws by which a society could be ordered, not regardless of one's creed, but it could be ordered through the irrelevancy of all creeds.
When traditional sources of authority are thrown on the trash heap of history, one needs a foundation, something that keeps morality from seeming to be nothing more than the arbitrary whim. Rights become the brick and mortar of that foundation.
Posted by Allan R. Bevere at 9:00 AM