The Problematic Notion of Rights #1 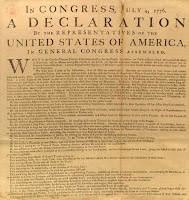 Introduction
The core moral notion of modern Western society, that permeates our ethical discussion, is the notion of rights. It is little noticed that in the midst of moral discourse individuals raise all kinds of questions about viewpoints with which we disagree, but never do people question the ground rules or the presuppositions of the debate-- the presupposition that something exists called inalienable rights. Most assume that rights language is the common ground in moral discussion because rights actually exist. Other than a handful of individuals (e.g. Alasdair MacIntyre, many years ago) who has ever asked the question, "Is there such a thing as rights?" Even Christians assume that rights exist and form the basis of moral discourse. Rights language provides everyone, whether they are Christians or Muslims or Hindus or atheists, with a common language for ethical and legal discussion.
But is the concept of rights problematic for Christians? Just what is a right and how does one decide what is and is not a right? Is it biblical? Has the notion of rights contributed to the loss of the decisive nature of Christianity? Has it undermined the significance of Christian doctrine for moral reflection?
Posted by Allan R. Bevere at 9:00 AM

Respectfully first, the word of the Declaration is "UNalienable"; there is a difference. It is a stated belief that these certain, named rights are divine and inherent to our existence as human beings (though they likely then only meant white, property-owning males). Having said this, then, I do believe we are divinely created with certain rights, certain intentions.

In my humble opinion, however, the only real right we've been entrusted with is that of choosing to walk with the Lord or walk away and into the world. Now that is freedom! As for constitutional rights for Christians, I think that if we allow ourselves to become too entangled in such disputes, we've lost our focus on that which is most important and we have become engrained (entrapped??) into a more worldly view than a spiritual one.

Unless one wants to go back to questions about slavery, women's equality, etc. then, no one has "rights" per se. But, certainly Christians would believe that human rights exist because all agree that persecution for one's faith is wrong. Why is it wrong?
As long as a society is ruled by law, and the people under it's rule abide by those laws, then, there is order and peace. Laws protect the values that are importan in a given society or organization. Laws are not wrong, unless they inhibit another's "right" to free choice. If, for instance, one wants to live in our country, there are certain requirements that must be respected, otherwise, we loose our right to choose to be a part of the country. This is what our immigration policy is about.

Human Rights are dependent on the assumption that all individuals are created with a certain dignity and honor, just because they are creations of God. This underwrites our laws, which support freedom and justice for all.
But, in countries or organizations that are ruled by force or cocercion, then those under leadership have no rights. They are slaves and are treated with dishonor and disrepect.This was the way Scriptures understood organizational structuring, for it was written within a paradigm of authoratarianism. Christians have traditionally believed in a linear view of history that has purpose and is controlled by God. But, this is questionable in today's understanding of science. Besides the natural sciences, archeological science also is challenged today in support of what has been accepted as "truth". The Jesus Project is up and coming and promises to bring out how the Jesus tradition began. Scholars work on these questions, so just "accepting" tradition is a high bill to pay, at the expense of "truth" and rationality.

In a society that believes and honors each person, as an individual, these are known as civil liberties, which governments are to protect, as this is what freedom is all about.

I must add that human rights, as it assumes an individual's right, does protect the individual from abuse of religion, such as fundamenatlistic Islam. Surely, no one would concur that a woman's "place is under her husband", when the husband beats her and the tradition disfigures her through circumcision...!This is what is being discussed by the U.N. on the Universal Declaration of Human Rights. Islam in its fundamentalist sense is not to be tolerated "in that name of religious freedom". Freedom has to protect the individual's choice, otherwise, we are doomed for tyranny of some kind!

Excellent! The interesting debate is always about the presuppositions, everyone else is just talking past each other.

Certainly rights are distributed differently in different systems, which would support a conclusion that they are a form of social currency. The assertion in the Declaration is that of "self evidence". I'm not quite sure what to do with something that is not universally "self evident".

Thanks for your initial comments. I think instead of responding at this point, I will simply continue to post on the matter.

I hope that all of you will join the discussion.