Fairness and Truth in Politics #2: Assessing the Candidates 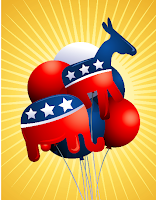 Scot McKnight at Jesus Creed has posted his political assessment of both John McCain and Barack Obama. He highlights what he likes about each candidate as well as his concerns; and he does so in a way that he neither elevates them to quasi-divine status on the one hand, nor demonize them on the other.
Scot provides us with an excellent example of a Christian approach to this political season, as he points out that as president neither candidate will bring in the Kingdom of God, nor hasten the coming of the Anti-Christ.
It is not a matter of whether or not some may want to take issue with Scot on portions of his assessment, rather the point is that we need more of this kind of Christian reflection on politics-- too many believers sound too much like Democrats or Republicans, and not enough like Christians.
Referring to Peter Kreeft, Scot writes the following: "The worst thing that can happen to the Church," Peter Kreeft says, "is what is happening to the Church now in the West, namely that the Church is deliberately conforming to the world." And he adds: "The Lion of Judah has become tame." And he adds: "The imitation of Christ has changed into the imitation of popular culture." "The modern world politicizes everything and imposes the political categories of Right and Left on everything…. And the Church is following the tune of this pied piper."
Now that is truth in politics.
+ + + + + + +
Cross-Posted at RedBlueChristian
Posted by Allan R. Bevere at 7:53 AM

Yes, Allan. I've commented on both posts over there, and I probably sound too much like a Democrat (when actually I'm neither), but most of the tone over there does seem to be Christian. It is hard when Christians hold strong convictions which might fit on one side more than the other.

But yes, Scot does a wonderful job on those posts.